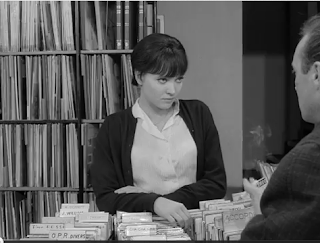 One of my favorite scenes in in Vivre Sa Vi is the record store scene that begins about 9 minutes and 21 seconds into the film.  The scene last for approximately 3 minutes and is done in a long take, making use of a dynamic dollying and panning around the store.   To me, this scene comes across as a hybrid of rehearsed / open filmmaking. It is an example of how Godard’s work being mechanically complex and not just conceptually. In fact, everything comes across as  planned with the exception of how the scene ends when the camera pans to a shot looking outside of the window of the record store.


I also like the examples of Distanciation scene in the film, such as when the repetition of lines, or “pick ups” left in the film, which Morrey points out. I think what is enjoyable is how Godard plays with Narrative fiction/non-fiction. There is a definitely a Brectian influence, certain scenes allow the spectator to get caught up in the narrative, just never for too long. The film allows the audience to get sucked in to the conflict or  Nana's finacial burden and her entering prostitution but repeatedly pulls them back, never allowing for complete identification with the character. This method could be viewed as a way to allow the audience to connect with how capitalism essentially traps them in their own decision making, and as a way to avoid the spectator seeing the negative side of capitalism solely through the scope of Nana's specific situation and problem.