There is a common denominator in Godard’s films, the construction of history and memory. Themes of memory and time, how to record history, using archives of images to tell a story, history as storytelling in an attempt to arrange certain memories, the diffused boundaries between fiction and non-fiction (documentary and fiction, the real and the imagined), cinema as archive of time and memory, the image as archives of images of time; the conception of cinema as both history and memory, a way of remembering the past but also the present. This is a search to understand the cinematic construction of history and memory in Godard’s films Notre Musique and Tout Va Bien.

The first one ending with the reflection of being your own historian and how that movie is a record of history for those who don’t keep one; the second movie is a continuous use of images, sound, music, quotations to evoke a reality that is not there anymore and its reconstruction through the use of images and thoughts evoked by a landscape, an image of something that evokes something else.

Specifically for this post I would like to focus on the construction of space, used as a tool for narration, in both films. In Tout Va Bien there is a Brechtian approach to history and the uprising events going in on in France in 1968. 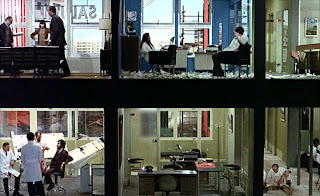 In Notre Musique, Sarajevo becomes the stage, in this case a landscape. A landscape of memory and history in an attempt of being reconstructed, curiously done by an Israeli journalist, Judith Lerner (as in Tout Va Bien by Yves Montand) in many ways becomes a documentary portrait of this city that is being rebuilt after war through the questioning of other wars like the Israel and Palestine conflict. The camera becomes a silent witness of this portrait in the documentary scenes where we constantly see the daily life of Sarajevo through its streets and the visiting of the landscapes used for remembering the lost lives, (the markets, the streets with cars and pedestrians, the constant focus on the women and children on the street, the public transportation like trains are constantly making a pause on the film, a transition between documentary and fiction, between the true life characters like Godard and the poet playing themselves and the fictional characters like the journalist and the french young woman Olga).


The interesting use of documenting a landscape within the narration of the story in this film leads to the use of landscape as a stage, also like in Tout Va Bien, but this time it is a physical space that exists and its intervened with objects, books (piles of books brought by different people) and characters that interact with them by siting texts in reference to war, land, the dead, wars in the name of colonization, and the need for poets and writers so time can survive. There is also the landscape of the bridge that is constantly referenced through the narration of the story and the quest of the journalist of a past and present and its relationship to land (the war battles for land). This landscape is a space for imagination. At one point of Notre Musique there is a sequence of the journalist sitting in the middle of the shot by the bridge, when she looks to the right she see 3 Indigenous People in getting out and in a car, when she looks to the left she see them again but this time on horses and wearing the classical Indigenous American outfit, a shot and reverse shot. This sequence followed the visiting of the stones in the pictures above and the reading of a text that reflected on the me and the other, history and memory. The associations personal memory can come into play with contexts that resemble it, two truths that happened in the same time in history. The quest of the journalist as she reads Levinas Entre Nos, Restore the past and make the future possible. 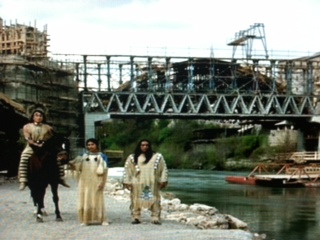 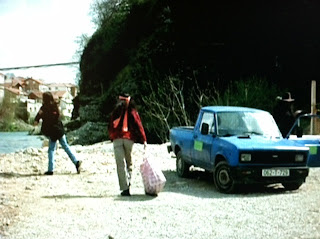 Deleuze wrote on Godard that his film is open and inclusive. He always used the word AND. In this case his films would be and attempt of History and Memory. A place for questioning, for dream and reality, for interior and exterior. History is the search within the memory of others and our own. Notre Musique is a shot and reverse shot of History and Memory, of me and the other, of the individual and society, living and death. Both Tout Va Bien and Notre Musique become Godards attempt of a historian. Sarajevo is a starting point to reconcile with the past by starting a conversation about the land a common land, a common landscape where you can then find forgiveness.
By Natalia Guerrero