Anyone who has seen a few Godard films can notice the recurrence of the prostitute.
Especially when it comes to Vivre Sa Vie amd the image of Anna Karina. Aside from the plot context in which woman appear as prositutes in Godard's work, the prostitute can be used as commentary on  economics. 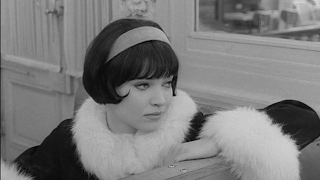 Godard uses the female form and sale of sex as a metaphor for capitalistic ideas, which is certainly present in the film.  Morrey points out the implementation of distancification techniques used by Godard, in part by the insertion of tableau, as a way for the spectator to not become too lost in Nana's experience and narrative that they cannot draw connections between there own lives as the consumer.

2 or 3 Things I know about her seem to take this connection between consumer driven society a step further. He again, uses prostitution as metaphor and commentary, this time to address the upper middle suburbia in Paris. A way to again, show the lengths at which society will strive for the consumption of things in which it does not need.

The prostitute can also serve as a metaphor for film, at least classical or hollywoodian film, because of the focus on beautiful imagery or beauty itself, which to Godard is the focus on something so fleeting.

Godard, while critical of both beauty and modernity, does not seem to hide his fascination with the material. Reconciling the allure to a consumer driven society and playing with ways in which it is a destructive force seems to be a large drive in his work.