For my final paper, I examined ways in which Jean Luc Godard's work can have examples in which it fits into Eisenstein's methods of montage, and ways in which his work deviates from it's linearity.

To do so, I wanted to pick three works that when placed together for comparison, a progression can be seen in how Godard uses montage. The three I chose were Vivre Sa Vie, Deux ou trois choses que je sais d’elle, and Histoire(s) du cinéma. 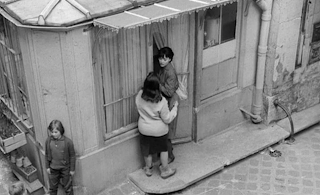 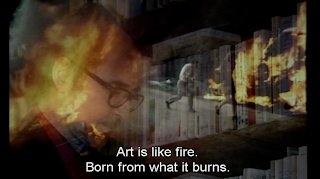 Through the analysis of these films, I have come to the conclusion that Godard's work primarily addresses Overtonal and Intellectual montage when it comes to Eisensteinian methods. Also, while Godard's montage still shows a progression, he is still constantly looking back to his past work as well as the work of other filmmakers. He is also looking back in terms of method. He finds ways to take simple montage and transform it into new ideas. To me, this is unique to Godard. He is always interested in comparing the past with the present as a means to move forward.

I also felt that Eisenstein's methods of montage only really addressed montage through shots or the camera. But why should that be the case? If we stick with his dialectical argument for cinema without limiting it to the image, there several ways in which in-congruence can be introduced into cinema. For example, Godard's mixture of noise and silence, text and image, fiction and non-fiction, and rehearsal and improvisational. One might be able to conclude that these are all examples of Overtonal Montage. However, they seem to move past Eisenstein and onto a more complex view on what montage is and what it is capable of.

For Godard, being a former film critic before he began film-making aloud him to look at what other filmmakers have done as way to see what still needs to be explored and what does not. In his later works, I believe he revisits early approaches to montage such that he has done a "full circle" in terms of discovery what filmmaking is to him, and Histoire(s) du cinéma is a way of not just burying the past for good, but learning how to use it to create new or alternate meaning.

To conclude, I feel that Godard did prove to be an example filmmaker for Eisenstein's "higher pathways" of thinking and montage, but he was not limited by linearity or by any concrete meaning. For Godard, meaning is always something that can be changed though rearrangement.