When composer John Cage came up with his piece 4'33'', perceive as four minutes thirty-three seconds of silence, he was actually proposing that any sound could become music. This piece is performed in 3 movements, or sections. For the first version the audience, in front of a stage, saw the a performer reach and sit in front of the piano, open the lid and then close it to mark the end of the duration of that segment. He repeated it 2 more times. The audience sat in "silence" listening to the noises surrounding them. It was controversial to the preconceived notion of music. However, Cage when trying to explain his experiment he reflected on the duration as the essential building block of all music, where  duration is the only element shared by both silence and sound. Therefore, why not fill this with either sounds, silence or noise? The third point is that the work of music is defined not only by its content but also by the behavior it elicits from the audience, they can either be satisfied or contribute to the piece. Basically there is not such thing as silence.

In Éloge de l'amour by Jean-Luc Godard there is a recursive use of a black screen, absence of image or a sum of images that yield too much light or exposure (over exposed images). This silence in between images play a similar role as John Cages experiment. This a sequences of moving images that begin with a non visual image and lead to another image, that leads to a non-visual image, in repeat. The relation to the timing in music and the timing in cinema can be related in similar terms as John Cage did when talking about silence and the new forms of authorship when it comes to composing an art piece.

Humberto Eco, in The Poetics of the Open Work, talks about the open-ended and aleatory nature of modern music, literature and art "pointing to the wider implications of this new mode of aesthetic reception for sociology and pedagogy, and for new forms of communication."(p.20) When talking about open text in writing, like in music, Eco explains that "blank space surrounding a word, typographical adjustments, and spatial composition in the page setting of a poetic text- all contribute a halo of indefiniteness and to make the text pregnant with infinite possibilities." (p.27) This opens to the free response of the one who reads it.

This is why Éloge de l'amour is one of my favorite Godard movies, when it comes to talk about the construction of memory its infinite relation to images that evoke other images. In this case the use of a non-visual image (black screen) becomes one of the sources for this being an continuous open text on the understanding of memory. The timing of non-image in between images is a silence open for the emotional and imaginative process the spectator indulges in while adapt our personal world into this images, either by association or by superimposition or juxtaposition; "a network of limitless interrelations". (p.24) Many of the images in this film are stripped from the referent, and the text (voice over) becomes part of the image, but at the same time the spectator sees himself confronted with a narration (that is a continuous questioning on memory process and thought) place over an image of nothingness, of images that are just images in movement through a space, the portrait of a fleeting space or landscape. A Time and Space that is not definite neither by the story nor by the narration, so it becomes the image of something we don't know but that we get to know by relating it to something already known. Where the initial referent of the image can become another image, a continuous process of reconstructing memory, a reconstruction that takes place in that silence, in that black screen with the sound atmosphere of the previous image, that leads to a new image.

The entire movie is perfectly timed withing this spaces blank spaces, the spaces of images of nothing, and spaces of images of the characters of the film within this image. There is a timing or a tempo that is defined also by the division of the film in chapters, a recurrent strategy used by Godard. The spectator, as the film, seem to float in a time and place that is not definite but that is certain that it exists. It is a constant open text and the journey of memory of each spectator is a varied as the possible interpretations or associations of each image. The silence in between is not silence. 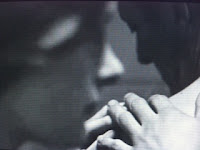 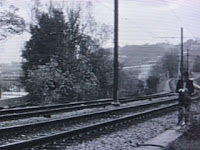 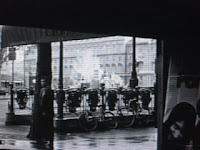 By Natalia Guerrero
Posted by JLG at 9:41 PM