A Woman is a Woman 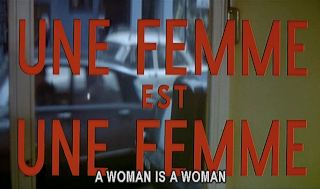 This was the first film of Godard's that I've seen. I was about twelve years old and remembered it solely as being this "cute" comedy with a pretty girl in it...

Directed in 1961, (after Le Petit Soldat, Karina's first movie with Godard - which wasn't released until 1963) Godard intended to make a musical, a "comic spectacle" but when he began his relationship with Karina, he added deeper issues and conflicts to the relationship between the two main characters Angela and Emile, making this film somewhat about his life with Karina: she is a heavy-accented Danish entertainer (in the movie she talks about having to call her parents in Copenhagen), they live together but are not yet married.
Originally, Godard wanted to make a musical and too often, it is advertised as being one, but it is rather a film with music, a film with an entertainer who wishes she was in a musical. As Angela says, "Je voudrais être dans une comédie musicale!" ("I would like to be in a musical !").

Since its creation, cinema has been codified whether it be in the script-writing or narration or the relationship of the actor to the camera: looking at the camera, jump cuts or the 180 degree rule were not to be used, so that the action on screen is coherent and understandable, the camera being at the service of the action. Nouvelle Vague filmmakers, in particular Godard, put a stop to this narrative logic. A Woman is a Woman fits into this new wave of thought and film-making: the beginning of the film -which like all of Godard's films is very stylized- is made up of titles in the colors of the French flag, saying  "ONCE UPON A TIME"; "GODARD"; "MUSICAL"; "LUBITSCH" etc.

Godard makes the viewer aware that it is a film that is being watched, whether the actor is actually commenting on the film (like in Weekend Roland: "What a rotten film.") or making a film in several chapters, or tableaux, like in Vivre Sa Vie. In A Woman is a Woman, Karina winks at the camera, Belmondo comments into it about Karina when she leaves "et elle s'en va" ("and she leaves.") and Karina even tells her lover that he has to greet the spectators, so they both bow into the camera, it is almost like a spectacle we are watching.

As for the production of the film, this was Godard's first Cinemascope and color film, which not only affected the size of the crew and the shoot schedule but also the amount of artificial light to be used, which was not to Godard's taste, since him and Coutard mostly used available light in other films. Godard also mapped out the film based on an apartment he was going to rent from a couple, but not too long before the shoot was to begin, the couple withdrew, which made Godard's crew happy since filming in a studio would be a lot easier: the camera would be able to move anywhere since the walls could be shifted, there would be no ceiling, so the lights could be placed anywhere. However, they were quickly disappointed, as Godard decided to construct an exact replica of the apartment, with its walls and ceilings and disadvantages.
As for the dialogue, Godard is known for giving their lines to the actors the same day (which for some actors such as Jean Seberg was a problem, as they couldn't study the character). In A Woman is a Woman, Brialy, Karina and Belmondo would have to learn their lines immediately before shooting, as Godard could not call the lines out to them during shooting because of direct sound, which made Karina -an untrained actress still- run off the set on many occasions.

As Brialy said, "[Godard and Karina] tore each other apart, argued [...] hated each other, screamed at each other." but they loved each other, like Angela and Emile.
It is a wonderful film, which will never get old. And yes, a woman is a woman. And there is absolutely nothing wrong with that.