What is postmodernism anyway?

In his chapter Smiling with Regret, Douglas Morrey confronts the classification of Godard as a postmodern filmmaker. As we have increasingly seen after his film "Weekend", Godard style undergoes a drastic transformation. As he because more enamored of video we see techniques such as freeze frame slowly leak into his cinematic form. Morrey also identifies the significant increase and change in Godard's citational style. This movement away from a traditional narrative, combined with experimental elements of montage, and quotation support the claim that Godard is a postmodern filmmaker.

Jean-Francois Lyotard defined postmodernism as the crisis of narrative, particularly in reference to the narratives inherited from the pervious generation of storytellers. Godard works hard to confront the traditions of narrative, even from his early works. Remember the appearance of title cards in Vivre sa Vie. He is interested early on in the organization of stories and the conventions of organization found in cinema at the time. As Godard career progresses we can see his evolution of narrative exploration. I agree with Lyotard that this period does confer a crisis in narrative, but the crisis is not destruction. His approach to his later films still employs narrative through experimental political, cultural, and social critique.

Morrey acknowledges that some commentators paint postmodernists as surrenders of political questions by citing the realization of a perfect political system in liberal democracy. It is true that Godard's more overtly political films like La Choinoise stand is stark contrast to more experimental films like King Lear, but to suggest as Robert Stam does that Godard's later work is only radical "in an aesthetic nature" completely misses the deep philosophical questions Godard raises about the nature of post industrial capitalism. Though Godard is not the only filmmaker to address concerns about the rapidly rising consumer culture, few filmmakers address this problem with such zeal. 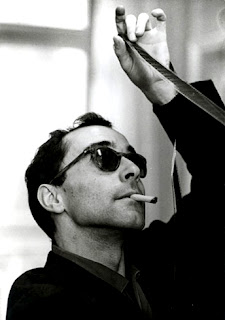 Stam's critique accuses Godard of technical and aesthetic tricks, while challenging the narrative as something banal. I couldn't disagree more. It is through his expanded use of montage, citation and juxtaposition in his later work that becomes this political component. I think that we have seen that Godard is a filmmaker who consistently challenges assumptions of political organization and the culture industry throughout his entire career. But there is a danger of, as Terry Eagleton says of allowing postmodernism to become a "catch all term for board cultural phenomena". Here we can see that Lyotard's definition is too broad. Without specific criteria, we find that the term "postmodernism" loses all meaning. Lyotars definition is too broad and does not adequately address our concerns here. Morrey then suggests Frederic Jameson as an alternative to Lyotard with his definition of postmodern culture as a critique of multinational capitalism and one that is overtly political.

In this sense, we can see that Godard clearly fits this definition. His use of citation and montage are explicitly directed to counter what he sees as the capitalist invasion of the daily life of people. One of my favorite examples of this is in the film where Godard juxtaposes clippings from magazines onto of dialogue of girls talking about sexual intercourse. What can be read as a innocent scene between two friends sharing their fears and questions about the intimate details of their sex lives, takes on a darker meaning when rapidly cut with images of products aimed at women to feel more beautiful.

Morrey suggests that the borrowing of forms without regard to their content is a characteristic of postmodernism. We can see this in Godard's use of quotation. Sometimes the quotations are used out of context, or as Morrey suggests " isolating a single thought, image, or observation that pleases him or that fits into the associative schema of the film". Some quotations can be seen as more significant than others. But, like his use of montage, this use of quotation is not postmodern in and of itself. Many filmmakers refer to other works, but do not fit within the confines of postmodern. But it is Gordard's use of quotation that is significant. It is his skill in juxtaposition both of references and montage that gives Godard this postmodernist label.

I argue that it is his use of quotation in combination with his use of montage creates a unique narrative progression where Godard attempts to incorporate ideas, motifs and symbols that exist outside of the narrative structure of his films. But this incorporation attempts to enhance rather than to distract or deconstruct the narrative. Those looking to reconcile Godard's narrative approach with that of a traditional 3 or 5 act structure will be disappointed. His approach delivers a story that the viewer must actively engages with to construct. It is this shifting of responsibility from the filmmaker to the viewer that gives these later films their style, and counts them among postmodern cinema.