Surrealism and the Secret Life of Objects 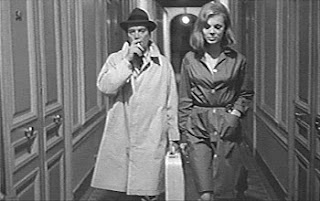 Godard's Alphaville has been described as a genre-bending blend of science fiction and film noir that also culls from pop art, surrealism and German Expressionism. Personally speaking, I perceived the film to be a treatise against the tyranny of rationality, logic and an ultimate call to poetry, and love. But while Godard has been lauded by many for taking on issues that were topical with an almost journalistic zeal, Alphaville has also come in for its fair share of criticism.

One of the sentiments echoed by critics like Pierre Samson is that Godard's vision of a dystopian society is cliched, and that his vision of technological dominance, an all-seeing computer/electronic voice and surveillance heavy city-state was enormously derivative even in the 1960s.  Samson in a scathing critique says, "Godard only chooses the most exterior details, he contents himself with naming things at the expense of knowing how to show them [...] he inhabits the level of a sort of exoticism of automation and modernism". Critics also found the film to be mainfestly reactionary. Godard's championing of humanizing values, and liberty, according to Samson reveals the "Constant temptation to fall back on petit-bourgeois individualism in the face of the fear of the unknown [...] Alphaville is one of the most demoralizing films around. It would like to show us the impossibility of any revolt, the decline of mankind in a controlled economy and the uselessness of all political systems"

However, another way to view the film would be to analyze Godard's choice of locating Alphaville in his present- in Paris in 1965. By choosing to build no elaborate sets, using light creatively and eschewing the  use of special effects, not only does Alphaville escape the fate of most 'futuristic themed films' by managing to look contemporary and relatable even to this day, it also manages to make a philosophical comment on the 'hyper-reality' of our times. In effect, by casting the reality of Paris as a fantasy city, Godard is critiquing a future that has already come to pass.

While an author like Barthes chooses to analyze facets of 'everyday' modern life, like, advertising, celebrity culture, and automobile design to expose the capacity of these structures to create mythologies/deceptions on a mass scale, Godard may also be seen as using  familiar sights of glass and steel buildings, ordinary looking corridors, foyers and architectural elements to make an ironic comment about the nature of our present. As one
of my readings online suggested, in his essay "Simulacra and Science Fiction," Jean Baudrillard says that a postmodern science fiction would put "Models of simulation in place and [...] contrive to give them the feeling of the real, of the banal, of lived experience, to reinvent the real as fiction, precisely because it has disappeared from our life (1994, p 124)." In an ultimate irony, which is likely to please Baudrillard, an essay by Chris Darke, <http://www.visionsofthecity.com/alphaville.htm> finds that an actual gated community by the name of Alphaville actually exists in Sao Paolo, Brazil, where its residents watch the hired help going through security checks on "Alphaville TV" and fly in and out by helicopter to the world outside its walls.

Alphaville can therefore be seen as a hallucination of the real. Moreover, in an excerpt of Alphaville the book – again by Chris Darke – the scholar offers an interesting observation about the surrealistic element in the film; Darke quotes American scholar, James Naremore who draws a parallel between the works of surrealist poet Louis Aragon who said of American crime films that "Speak of daily life and manage to raise to a dramatic level a banknote on which our attention is riveted, a table with a revolver on it, a bottle that on occasion becomes a weapon, a handkerchief that reveals a crime..." In Darke's analysis, Alphaville also reveals the secret life of things, "By featuring a convertible that is an interplanetary craft, a volume of poetry that doubles as a codebook, a cigarette lights that is a Promethean torch, not to mention the $3 Phillips fan, lit from beneath that often represents Alpha 60 when the computer speaks." By doing so, Darke maintains that Godard rediscovers the crux of surrealism – the contamination of reality by the imaginary.

In the final analysis, if one were to go by Godard's own vision of the film, he says, "I didn’t imagine society in twenty years from now, as [H.G.] Wells did. On the contrary, I’m telling the story of a man from twenty years ago who discovers the world today and can’t believe it." And through use of sound, and the camera work by Raoul Coutard, Godard creates a feeling of alienation even as viewers walk through familiar terrains of office corridors, or find themselves in anonymous but recognizable hotel rooms. Science fiction then becomes as real as an office block, or as 'fantastical' as a drive through a deserted roadway.
Posted by JLG at 11:23 AM