Prostitution in Godard films and Enjo-Kosai in Japan

In a couple of Godard's films, namely "2 ou 3 Choses que Je Sais d'Elle" and "Vivre Sa Vie", the main characters are forced into prostitution to supplement their unaffordable lives.  In "2 ou 3 Choses…" it's Juliette, a housewife who has turned to prostitution, who is at the center of the story.  Godard presents a film that can be described as a dramatized documentary that follows Juliette through her day and her life of clandestine prostitution.  He also presents some other characters, including other women that are interviewed.  Godard found inspiration for the story when he came across some articles, which told of the new high-rises built outside of Paris.  These blocks of buildings were constructed to accommodate the new working classes, but when the apartments and other commodities prove too expensive to afford, the housewives would turn to prostitution to supplement their family incomes.  Godard also uses this story as a vehicle to present and discuss (shared themes with his other films up to this point in his career) the themes of capitalism and language.  I just wanted to concentrate on capitalism and how the character of Juliette illustrates it. 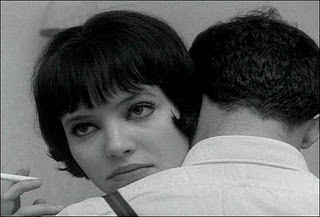 Above: Nana with a customer in "Vivre Sa Vie"
Below: Juliette with another prostitute in "2 or 3 Choses..." 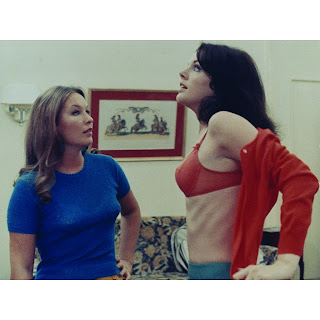 The descent into prostitution, for Godard, mimes our growing obsession with objects and the way in which our capitalist society works.  Kaja Silverman says in the book Speaking about Godard that “My Life to Live is concerned with prostitution as a mechanism for enforcing a particular psychic condition” (pg. 20) and that psychic condition is one where no individual has any independent desire of that desire to satisfy that of the other, just like the rule of capitalist economies that “the customer is always right”.  Nana, in Vivre Sa Vie, must accept anyone who pays which reflects our values in society today, which is that money wins over everything.  Things will be sold to the highest bidder.

In “2 ou 3 Choses…” Juliette prostitutes herself in order to buy things such as a designer dress, a car for her husband (presumably since he thought she just got it through great deal making, as he is so ignorant of her extra-domestic activities), and other such things.  Godard “seek[s] to expose the functioning of the capitalist system, for which prostitution serves as a global metaphor…[because]…prostitution is often a system of exploitation manipulated by a third party” (pg. 443, Rochefort and Godard).  The exploiter in “Vivre Sa Vie” is Nana’s pimp, and it is questioned in “2 ou 3 Choses…” but most probably her family although they are ignorant of her actions, they reap the benefits, as well as “American-style imperialism (through advertising)” (pg. 443, Rochefort and Godard). 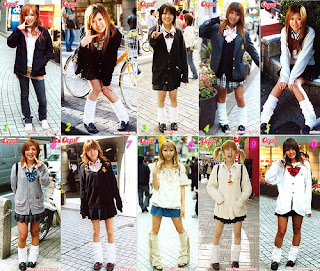 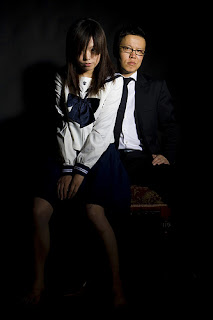 Photo from an editorial about Enjo-Kosai

“2 ou 3 Choses…” is also about how objects are the connections between people now… and this isn’t better illustrated in real life than in Japan (probably one of the most materialistic contemporary societies), where the practice of “enjo-kosai” (compensated dating) is common and accepted to a degree.  Women of all ages engage in Enjo-Kosai, but for the most part, it’s high school girls who trade their charms and company (many of them say they do not engage in sexual activity, some limit it to anything but intercourse) for designer bags, phones and sometimes cash from older men.  It is ‘different’ from prostitution in that the men and girls usually go out on a couple dates and they are compensated in objects as opposed to cash.  It is also quite accepted by society, as there are no hard laws against dating minors and sex with minors under consent in most Japanese towns and cities.  This has spread beyond Tokyo and is quite prevalent in the smaller towns.  Many of the girls involved also find nothing wrong with trading their company and charms for designer goods, since they think they are making the most of what they have.  They treat their bodies like commodities in exchange for other commodities.  The girls list themselves with telephone clubs and on certain websites that are compared to matchmaking services, but with a more menacing connotation.  I think Godard would find this situation in Japan very inspirational for a film concerning the evils of capitalism/materialism, as it’s similar to the articles he read in France more than a half a century ago, but to the exponential degree.

You can find some more information on Enjo-Kosai here:
Enjo-Kosai article by an American English teacher in Japan
Education in Japan Community Blog
A Personal Account of Enjo-Kosai